You are at:Home»Special Report»The missionary priest and the migrant fishers of Southeast Asia

The nature of the Congregation the Missionary of St. Charles – Scalabrini is to serve the migrants with the slogan, “I was a stranger, and you welcome me” (Matthew chapter 25, verse 35; the Holy Bible).

It was in 2017, when he attended the International Conference of the 24th World Congress of the Apostleship of the Sea in Taiwan, that Rev. Fr. Tran Van Thiet, CS got “caught in the net” and embraced his “divine mission” to serve the migrant fishers in southeast Asia.

Fr. Thiet was born in Vietnam in 1982. He followed his calling to priesthood and joined the Congregation of Missionary of St. Charles – Scalabrinian seminary in Vietnam in the year 2005. He then moved to the Philippines in 2008 to study at the Loyola School of Theology in Ateneo de Manila University. 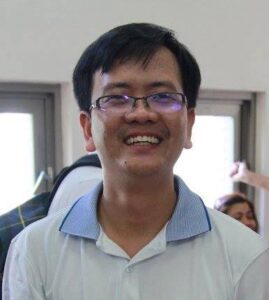 As soon as he set office, he immediately started to work on his mission for the migrant fishers. Taipei is considered as the center of southeastern migrant fishers from Philippines, Indonesia, Thailand, Vietnam and other countries in Southeast Asia.

To understand more about his field of mission, he sat down in consultation with various experts, volunteers and church officials.

“We started visiting the different fishing harbors, big and small alike. We don’t care about how much time we spend just to meet and talk to them,” Fr. Thiet told Rights Corridor in an e-interview.

“In order to be sure the fishers are there in the harbour, we go and see them in a bad weather. We have this saying that when the weather is bad, MWCD is out to meet the fishers,” he added.

After several months of constant visitation, sharing meals and coffee with the migrant fishers on their fishing vessels at times, the group slowly gained the trust of the migrants who began to open up about their “hidden reality”.

The newly ordained priest learned of the abysmal living condition that the migrant fishers have to endure every single day.

“We are living like animals,” one migrant told Fr. Thiet, adding that sleeping in a oil engine of the vessels without blankets and full of cockroaches and bed-bugs is a common thing.

The migrants were also made to work during cold season without proper clothing and were poorly fed by their employers.

A few of them hesitantly disclosed that a limited number of public toilets and bathrooms in the harbour were being shared by hundreds of migrant fishers.

Moved by the migrants’ ordeal, Fr. Thiet wasted no time in mobilising his team in order to give them immediate assistance. He sought the aid of Caritas Taiwan and Daughter of Charity Sr. Mary Nguyen Thi Hong Diem, DC, who helped the group find donors and sponsors.

Thankfully, his congregation also approved his project to support the mission for the migrant fishers in collaboration with Stella Maris and SIMN (Scalabrini International Migration Network).

“It’s sad to say even though we have many plans (for the fishers), we cannot put them into action for lack of funds and due to the great need for assistance,” said Fr. Thiet. “But through (our sponsors) we were able to give new sets o jackets, blankets, bonnets, and  even food supply like rice and meat. We were able to carry out some programs, medical mission, forum and updated on labour laws, Holy Masses, etc.”

Since then, MWCD has tirelessly worked on giving aid and support to the migrant fishers. Among MWCD’s many accomplishments include helping the migrant fishers who were hit by the collapse of Taiwan’s Nanfangao bridge in October 2019, where six fishers died and 20 others lost their belongings.

MWCD, through Fr. Thiet, negotiated with the Deputy Minister of Agriculture, Minister of Transportation, and Yilan Bureau of Labour to give the affected fishers accommodation complete with facilities on land, and to compensate the family of the deceased fishers and survivors of the tragic accident.

“We also assisted those survivors until they were able to transfer to new employers,” the missionary priest added.

In 2020, MWCD has served about 5,110 migrant fishers and the group played a big role in the founding of PSAT-Philippine Seafarers (Fishers) Association in Taiwan.

“Recently we handled a case of six fishers who filed a complaint against their broker and employer for illegal deduction and forced labour. These fishermen were sheltered for nine months. We’re very happy that they were able to transfer to factory works, but their case regarding non-payment of overtime is still ongoing,” Fr. Thiet said.

Aside from helping the migrant fishers, MWCD also caters to the needs and problems of young migrant students in Taiwan. A new group of volunteers was also formed and named SHIP, whose mission is to give lunchboxes to the homeless locals at Taipei Main Station and Long Shan Temple.

“Every first Saturday of the month, a pantry of goods, vegetables, fish, meat and anything available are given in to the students of different nationalities for free during the Covid-19 pandemic. Now they are also our volunteers in the mission for fishers,” added the missionary priest.

During the pandemic, the Taiwanese government and the Archdiocese of Taipei came up with various preventive measures to protect the parishioners. The diocese had ordered to temporarily stop large gatherings and Fr. Thiet’s office has to carry out its work online.

“But we still carry on with individual assistance, visiting fishers on fishing harbours with precautions and protective PPE,” he explained.

“During the first wave of pandemic, we gave away thousands face masks, alcohol, sanitizer, leaflets prevention protocols to keep them from getting infected. This time, in the second wave we were forced to stop going to the ports, following government protocols. But we will get back on our feet in the service of those who are in need.”

Fr. Thiet believes that with the help of mission groups like MWCD, migrant fishers will not only survive but thrive amid the scathing effects of the pandemic.

Despite the setbacks brought about by Covid-19, the missionary priest still looks forward to a good future for the organisation in the ‘new normal’ setting, saying he and his team of volunteers are ready to take on all challenges the future may bring.

“We continue working for the benefit of the migrants. We are always up to any challenge because our mission is to serve the most vulnerable group of workers, students, undocumented and those who come to ask for help.”

The nature of the Congregation the Missionary of St. Charles – Scalabrini is to serve the migrants with the slogan, “I was a stranger, and you welcome me” (Matthew chapter 25, verse 35; the Holy Bible). As a Scalabrinian, Fr. Thiet follows the Scalabrinian Rule of Life, “We are committed to continuous updating of our pastoral activity to bring it in line with the ever-changing demands of the phenomenon of migration and to guarantee our fidelity to the preferential option we have made for the neediest migrants” (No.30).

The missionary priest follows the example of Jesus Christ, who Christians believe to be the first “fisher of men”. He sees migrant fishers, the neediest of all migrant workers, as members of his family. Hence, with all his heart and soul, he finds all means to give them the love and support they need.