A Thai army general and more than 50 others have their prison sentence increased by a Thailand court of appeals for the crime of trafficking Rohingya refugees.

In is considered to be the country’s largest human trafficking trial involving more than 103 defendants whose casebegan in 2015 after a crackdown following the gruesome discovery of dozens of shallow graves in jungle camps near the Thai-Malaysian border.

Traffickers had been using the camps to hold mostly Rohingya Muslim migrants hostage until their relatives were able to pay for their release, authorities said.

In 2017, a criminal court sentenced 62 defendants on 13 different charges, including trafficking in persons, smuggling illegal migrants into the country and organised crime. 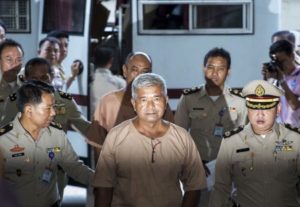 The appeals court late on Thursday dismissed convictions for two defendants while increasing the jail terms for 55 others with additional charges of smuggling illegal migrants. Some of these were also given additional prison time for multiple human trafficking charges.

Those receiving longer sentences include former army Lieutenant General ManasKongpan, who saw his 27-year prison term for trafficking and corruption increased to 82 years.

BanjongPongphol, an ex-mayor of Padang Besar in Songkhla province, saw his prison sentence increased to 79 years from 78.

The court also upheld the harshest sentence of 94 years for SoeNaing, a Rohingya man who the authorities said is a key figure behind the trafficking network. He was found guilty of assault causing death and human trafficking.

Myanmar regards Rohingya as illegal migrants from the Indian subcontinent and has confined tens of thousands to sprawling camps in Rakhine state since violence swept the area in 2012.

The unrest prompted tens of thousands of Rohingya to flee Myanmar by sea. This exodus by boat peaked in 2015, when an estimated 25,000 people crossed the Andaman Sea for Thailand, Malaysia and Indonesia, many drowning as unsafe and overloaded boats capsized.