You are at:Home»Special Report»She believes public service is a calling, ‘not just a job’

Before she could finish her term as the head of the Philippine Overseas Labor Office (POLO) in Australia’s capital city of Canberra, Labour Attaché Felicitas Bay had to fly back to the Philippines after her new boss, Department of Migrant Workers (DMW) Secretary Susan “Toots” V. Ople, gave her a new assignment.

Ms. Bay is now part of DMW top brass, whom the Secretary described as “a mix of seasoned government officials and new faces who share a commitment to serve our Overseas Filipino Workers (OFWs)”.

A “seasoned government official” is indeed the best way to describe the former labour attaché, having dedicated more than 30 years of her life in public service.

A lawyer by profession, Ms. Bay entered government service in 1990 as a prosecuting attorney at the Philippine Overseas Employment Administration (POEA).

She was later on given the position of Labour Attaché in Doha, Qatar and served the overseas labour office there from 2005 to 2007.

After finishing her tenure successfully in Qatar, Ms. Bay went back to home base to serve as the Department of Labor and Employment’s (DOLE) International Labor Affairs Bureau Director, supervising all labour attachés at their posts, until 2010.

As DOLE’s bureau director, she represented the department as implementer of its labour policies and programs overseas and worked towards workers’ protection through labour documentation, legal assistance and welfare services. 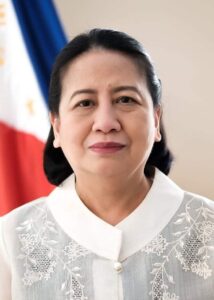 In her four and a half years of office as POLO Dubai chief, Labatt Bay, as she was fondly called in Dubai’s huge Filipino community, came up with initiatives and reforms to ensure that every overseas Filipino who would come to the Dubai labour office for assistance was served satisfactorily.

As part of the Philippine Consulate General in Dubai and the Northern Emirates, Ms. Bay helped in the promotion of good inter-country relations, while protecting the rights and welfare of Filipino migrant workers in her jurisdiction.

Her program on upskilling for Filipino migrants workers in collaboration with the Technical Education and Skills Development Authority (TESDA), won her and her staff a number of governmental awards.

She also played a role in the mediation between the Philippine government and the UAE government; identifying initiatives to improve workers’ welfare through the Abu Dhabi Dialogue (ADD).

“Given Labatt Bay’s long-standing institutional and legal experience and memory serving our government across various geographic locations internationally, I am certain that she will thrive and deliver more effective and innovative policies and programs for OFWs in the future,” he said.

The former POLO Dubai chief’s rise from the ranks was also welcomed by OFWs and members of the Filipino media in the UAE alike.

Ericson Reyes, current president of Filipino Social Club, a Dubai-government licensed Filipino organisation, believes that with Ms. Bay’s field expertise in the implementation of labour policy and programs overseas, more Filipino migrants would be helped, now that she has taken up a higher position in government.

“Through her previous work, she has ensured the welfare and protection of Filipinos hoping that Filipinos can achieve a better standard of living abroad. On behalf of the Filipino community here in Dubai through the Filipino Social Club, we congratulate Asec. Felicitas Bay,” Mr. Reyes said.

“It was indeed good news that she is among the senior officials of the newly created Department of Migrant Workers. She will touch more lives,” said Mariecar Jara-Puyod, senior reporter at UAE-based newspaper Gulf Today.

“Asec. Felicitas Bay is a public servant so professional as a news source, as a foreign service official and as a pillar in community work. I am proud that among her professors at the San Beda College of Law was my paternal uncle, Atty. Virgilio Briones Jara. He remembers her fondly,” added the journalist who has been in the UAE for the last 17 years.

Ms. Bay left her Dubai post in July 2021 and went straight to Canberra for, unbeknownst to her, would be her last stint as a labour attaché and POLO chief. She stayed in Canberra for only 13 months.

“An officer or staff who is not learning new things, who is not growing professionally, and is not firm in reaching his career goals, is not likely to stay long in government…I am fortunate to belong to an office where the officials and personnel exert their efforts to elevate the lives of Filipinos,” Ms. Bay said in her first interview with this writer in 2017.

“There is a certain altruistic feeling and it feels good that you are making a difference. Public service is a calling and is not just a job,” she said.