You are at:Home»RC Exclusive»Migrant deaths: The sad plight of Nepali migrant workers in the Gulf region

Out of approximate 1,500 workers migrating to destination countries in the Gulf region per day, at least three return dead.

Foreign employment plays a major role in the socio-economic landscape of Nepal, a small and landlocked country in South Asia, with remittances from Nepalis working abroad have become a major source of income to many households and the largest contributor to the country’s  gross domestic product (GDP).

The 2020 labour migration report released by Nepal’s Ministry of Labour, Employment and Social Security showed that the volume of financial remittance by migrant workers has significantly increased to US$8.79 billion in 2018 – 2019 from US$2.54 billion in 2010 – 2011.

On the downside, the report showed that thousands of Nepali workers seeking temporary employment in the Gulf States and Malaysia have been subjected to abuse and exploitation. Eighty-eight percent (88%) of Nepali migrant workers in these destination countries have been compelled to work in low-paying and unsafe work environments.

Even more shocking is the government’s data on migrant deaths in the Gulf region.

Out of the approximately 1,500 workers migrating to destination countries in the Gulf region per day, at least three return dead. A total of 7,467 Nepali migrant workers died between 2008 and 2018, the Nepali government reported.

However, human rights groups like the Law and Policy Forum for Social Justice (LAPSOJ-Nepal), an organisation of research and strategic litigation experts, said that the government data does not fully capture all the migrant deaths as it relied mainly on the information given by relatives of the deceased who asked to be compensated, and excluded information on thousands of undocumented migrants.

A February 25, 2021 article in The Guardian revealed that 1, 641 Nepali migrant workers have died in Qatar since it embarked on a massive building programme in preparation of Qatar World Cup 2022.

The high rate of deaths among migrant workers in the Gulf state has raised serious concerns and strong criticisms among human rights campaigners worldwide.

Last month, the Norwegian national football team has officially called for the boycott of the 2022 football tournament.

Migrant deaths are expected to rise as the COVID-19 pandemic continue to devastate the economies of even the richest of these destination countries, causing a state of trepidation among migrant workers, their families and the country whose economy largely depends on foreign employment.

Human rights and migration experts from South Asia have tackled the matter of concern in the April 17 episode of RC Dialogues, an online programme of news and research website Rights Corridor (RC), hosted by RC managing director Froilan Malit, Jr.

Anurag Devkota of Law and Policy Forum for Social Justice (LAPSOJ-Nepal), Vani Saraswathi, Associate Editor and Director of Projects, Migrant-Rights.org, Dr. Naresh Sen, Ph.D., Secretary General/BOD and former VP of Nepal Association – NRNA UAE Community, and Murtaza Khan, partner at Fragomen, the world’s largest immigration firm and representative of the GFMP’s Business Mechanism for the Middle East, attempted to answer critical questions about the origin and the destination states’ responsibilities to protect the rights and welfare of migrant workers, in an aim to come up with recommendations to better address migrant vulnerabilities in the Gulf region.

In his virtual presentation in RC Dialogues, human rights lawyer Anurag Devkoto said, “natural death” or “unidentified death” has been the common cause of migrant deaths in the destination countries, followed by cardiac arrest and traffic accident, based on government data.

“Migrant workers have to go through stringent medical examinations before they could work in these destination countries and only those who are physically fit can go. And for these young and physically fit workers to die of an unknown reason is dubious,” said Mr. Devkota.

“These destination countries should be responsible and should be held accountable for one and every death that happened in their territories, within their boundaries,” he pointed out. 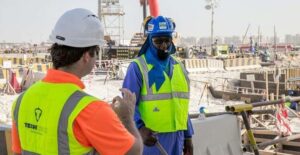 Vani Saraswathi emphasised on the lack of analysis on why are there more deaths among young Nepali male workers of certain age group than women migrant workers or young male workers of other nationalities.

Dr. Naresh Sen on the other hand, criticises the Nepali diplomats who he said represent the migrant workers in the destination countries and whose primary duty is to protect migrants’ rights and welfare, for their inaction in cases of death of undocumented workers.

“The government has put out a notice saying if you are a migrant worker on visit visa, we won’t entertain you at all. Forget about the compensation,” Dr. Sen said.

Dr. Sen added that in general, the Nepali government has no structure in generating decent jobs for migrant workers in the destination countries, nor in promoting and advocating smooth reintegration similar to that the Philippine government.

Immigration law expert Murtaza Khan highlighted the importance of data and the role of stakeholders in addressing migrant workers’ concerns as a whole.

“Bringing out data plays a very important role and to start building on these data to look at solutions in different approaches,” he said.

“We need to engage multiple stakeholders to come to the table, and to [use]those facts and figures to come up with targeted responses to specific problems.”