International Human Rights Day falls on Thursday, December 10, and despite government restrictions due to COVID-19, different human rights groups in the Philippines have planned to commemorate the day with huge rallies in the main thoroughfares of Metro Manila and in other major cities. Among other demands, they want President Rodrigo Duterte to resign.

Karapatan, an alliance of individuals, groups and organizations working for the promotion and protection of human rights in the Philippines, has been organising International Human Rights Day mass rallies every year for the last four years.

The alliance has expected a massive turnout in this year’s International Human Rights Day protests against the sitting administration.

“This year’s human rights day is significant for us for we will be calling for the resignation of President Duterte through this major mass action on the streets of Manila and elsewhere in the Philippines. We think it’s high time to end this kind of governance and promote truth and justice in our nation,” Cristina Palabay, Secretary-General of Karapatan (Rights) Alliance Philippines, and Regional Council Member of Asia-Pacific Forum on Women, Law and Development told Rights Corridor.

Over the past months, the spate of political attacks on activists and dissidents in the Philippines has dramatically escalated and the National Task Force to End Local Communist Armed Conflict (NTF-ELCAC) headed by President Rodrigo Duterte himself, is at the center of this spree.

According to Ms. Palabay, the term “red-tagging or “red-baiting” that has become a catchphrase among Filipinos, are not just mere words as far as the president and his allies are concerned.

Duterte’s government has trained its guns on activists, political dissenters, critics, members of the opposition, free expression advocates and independent media, she said.

“We have been labeled as terrorists, communist fronts, a noisy nuisance, barriers of development, druglord coddlers and many other derogatory and false labels. These have been translated into policies and practices of state forces in the course of their counter insurgency campaign. And the whole conduct of political homogenization of the president and his allies in power,” said Ms. Palabay.

Ms. Palabay pointed out, Human rights defenders like her are not the only ones who have been subjected to malicious and the frivolous attacks against members of the political opposition in the country. 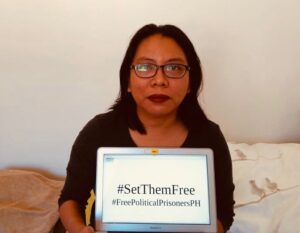 “The spectrum is quite broad…from media outfits and journalists, to beauty queens, to showbiz personalities, to bishops, nuns, and lay leaders, to humanitarian organizations like Oxfam and Caritas, to ethnic groups, to peasants and labourers, women and children, government employees, health workers, even local government officials and legislators, lawyers and human rights workers like us. Practically everyone who will oppose the views of those who are in power will be red-tagged,” she said.

The veteran activist added that the government’s newly imposed draconian anti-terrorism law with its vague, overbroad provisions, has posed a threat to any Filipino who will express political dissent as they will be designated or branded as terrorists and could face arbitrary arrests.

Currently, there are 646 political prisoners in the country and 400 of them were arrested during President Duterte’s term, including indigenous woman human rights defender Beatrice “Betty” Belen, who is a member of the advisory council of women’s rights group Gabriela’s chapter in Cordillera and was red-tagged by the military.

She was arrested on October 25 for illegal possession of firearms and explosives, a charge which rights advocates claim to be “fabricated”.

In the last four years, a total of 13 human rights defenders have already been killed in the different parts of the country because of what they stand for.

One of the most recent is that of human rights activist Zara Alvarez who was gunned down in Bacolod City in the country’s western Visayas region on the night of August 17.

Alvarez was Karapatan’s former campaign and education director and paralegal in the Philippines’ central Visayas region when she imprisoned for nearly two years and after her release in 2020.

Before her death, she was actively conducting relief operations as part of a health programme for communities affected by the COVID-19 pandemic.

Following Alvarez’s killing, other activists in the region have reportedly been receiving death threats in their social media accounts saying, “You’re next”.

Based on the data gathered by Office of the United Nations High Commissioner for Human Rights, there were a total of 248 killings of human rights defenders, legal professionals, journalists and trade unionists between 2015 and 2019 in the Philippines.

Peasant groups who have been demanding government support and fighting for their right to agricultural land for decades, are no exceptions to persecutions by government forces. This has been disclosed by Danilo “Ka Daning” Ramos, National Chairman of Kilusang Magbubukid ng Pilipinas (Peasant Movement of the Philippines) in a webinar hosted by Rights Corridor on Dec. 06.

KMP is a democratic and militant movement of landless peasants, small farmers, farm workers, rural youth and peasant women with over a total of 1.3 million members spread out in 65 provincial chapters and 15 regional chapters across the country.

“President Rodrigo Roa Duterte behaviour is very disturbing as it is against what is stated in the 1987 Constitution, which says in Article 2 Section 4 in part, that the prime duty of the government is to serve and protect the people…But what he’s doing is the exact opposite. Why? He had peasants arrested, tortured, branded as terrorists and killed,” Mr. Ramos said in Filipino.

A total of 290 peasants have already been killed since Mr. Duterte was elected into office in 2016 and a number of peasant leaders including KMP’s council members have been arrested after being falsely charged with murder and illegal possession of firearms and explosives, Mr. Ramos said.

“Thankfully, these cases have been dismissed by the courts after we relentlessly worked to prove their innocence,” he added.

The well respected peasant leader alleged that killings, bombings, illegal arrests and detentions are rampant in areas where more peasants and members of ethnic communities have joined KMP’s “Land, Food and Justice” campaign.

The scrapping of RA 11023 or the Rice Tariffication Law is part of this campaign, Mr. Ramos said.

The enactment of the contentious law, which was supposed to deregulate imports and make the Philippines become more food-secure, did not bring any improvement to the Philippine rice industry. Instead, the selling prices of both palay (rice seedling)  and rice for local farmers have gone down and the country’s rice imports recorded its highest volume ever.

The loss has impacted about 2.7 million families of peasants across the country, left millions of debt-ridden farmers either bankrupt or landless who ended up as farm labourers to wealthy landlords.

“This is an ongoing struggle because we are persistent in our fight for our right to our agricultural lands and our fight against environmentally destructive projects of the government. We demand for genuine agrarian reform and genuine industrialisation for we are aware of their impact to the economy, to all Filipinos, even to our migrant workers,” stressed Mr. Ramos.

Ms. Palabay said, human rights campaigners in the Philippines commemorate the International Day of Human Rights with deep concern as the most challenging times in the country’s history continue to unravel; when the rule of tyranny and authoritarianism and the worsening climate of impunity is set in the context of a deepening economic crisis made even worst by the impact of neo-liberalism and COVID-19.