Former administrative staff at the Philippine Overseas Labour Office in Dubai, UAE (POLO Dubai) has been recently sworn in as new Labour Attache after his tour of duty in Dubai officially ended in March 2020.

“We are pleased with the promotion of its former administrative staff Antonio Mutuc Jr. His four-year assignment in Dubai invariably exposed him to OFWs’ (overseas Filipino workers’) concerns, employment facilitation and capacity building services,” said Atty. Bay, adding that Mr. Mutuc Jr. is admired for his dedication and commitment to his work.

“We believe that in his next assignment, he will be armed with the training, learning and experience he got from his tour of duty in Dubai.” 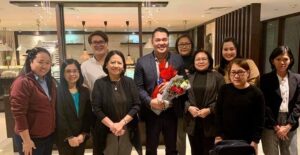 The Philippine Overseas Labour Office is the Department of Labour and Employment’s link to the world and is directly under the Office of the Secretary of Labour. It acts as labour department’s operating arm for the administration and enforcement of its policies and programs applicable to the Filipino migrant workers.