You are at:Home»OP-ED Columns»Filipinos in Italy appeal for assistance as COVID-19 spreads rapidly in community

Many overseas workers and their families have placed themselves in self-quarantine in Rome.

Europe has been declared the new epicentre of coronavirus COVID-19 and Italy has become the worst affected country in the world. The whole nation has been put into a total lockdown with only supermarkets and pharmacy allowed to operate. Despite the strict measures imposed by the Italian government, the number of deaths continues to soar.

With casualties seemed to be mounting on a daily rate, there has also been a rise in the number of Filipino workers who have contracted the virus.

According to Filipino migrant workers group, Overseas Filipino Workers (OFW) Watch Italy, about 28 Filipinos have already contracted the virus and now in self-quarantine. Their families and those who have been in close contact with them have also placed themselves in isolation.

Jimmy who works as a caregiver in a homecare for elderly people in Emilia Romagna, Italy is one of those who were quarantined. One of his colleagues with underlying health conditions died shortly after being tested positive for corona virus.

“The homecare centre has advised me not to work for fifteen days when my colleague died of coronavirus infection,” Jimmy told Rights Corridor.

“The problem was, that colleague didn’t tell anyone he contracted the virus. He was afraid he would be shunned. He only told us he was experiencing digestive discomfort that’s why he wasn’t feeling well. I think what he did was selfish and unfair,” Jimmy said.

“Six days after my colleague died I felt very ill. I had chills, and very high fever. I had shortness of breath. I called my family doctor and I was diagnosed with the virus,” he said. “I don’t like to go to the hospital because I am afraid I won’t be seeing my family anymore. The husband of my wife’s employer was brought to the hospital and died alone. He wasn’t able to see his wife, children, and grandchildren. I don’t like that to happen to me.” 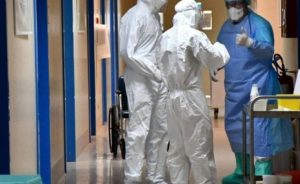 Doctors on duty in the emergency room to treat COVID-19 patients at a hospital in Pistoia, Italy. (Photo: Private)

According to Jimmy, it was his wife who helped him overcome his fear and anxiety and helped him deal with the disease.

His wife was sometimes forced to go to the supermarket to buy food supplies despite government’s order for people who have been in contact with the diseased to stay at home so they will not spread the coronavirus. Jimmy said his wife did not show any symptom of COVID-19 so he is not sure whether she got it or not.

“I felt the world has collapsed on me. But then, slowly I learned to cope and be positive. I didn’t like thinking about my disease because it was stressing me. I never lose hope. I believe there is always tomorrow,” he added.

Throughout his ordeal, Jimmy insisted to stay in his house because he was afraid of the rapidly burgeoning number of patients in the hospitals. He was afraid he might not be properly attended.

Meanwhile, in Parma City in the northern region of Italy, there are 5 overseas Filipino workers who tested positive for the pneumonia-causing virus, according to a report obtained by the OFW Watch task force.

In Rome, a Filipino couple was confirmed to be infected with COVID-19. They claimed they have contracted the virus from their employer. They are working as live-in caregivers.

Many overseas workers and their families have placed themselves in self-quarantine in Rome. 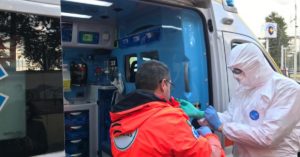 In Bergamo, northeast of Milan, one OFW has been confirmed to have died of coronavirus. It is believed that he contracted it from his employer.

In Milan, two Filipino families are currently in self-quarantine. They have asked OFW Watch volunteers to deliver them food and medicines as they are not allowed to go out.

In the sixth largest city in Italy, Genoa, a  Filipino family who claimed to have been infected with COVID-19 had asked for OFW Watch Task Force assistance for a temporary accommodation so that they could isolate themselves from the community.

Meanwhile, soaring number of work displacements due to Italy’s total lockdown is causing so much uncertainty and insecurity on individuals and families of migrant workers. The closure of all commercial activities exacerbates economic tensions.

Overseas Filipino Workers in Italy, a national alliance of Filipino organisations, have come up with a task force to protect the rights and welfare of Filipinos in the period of epidemic. In an initial report, roughly 600 individuals and families have been temporarily and permanently displaced from their jobs.

The low-income sectors are extremely vulnerable to be displaced. Many Filipino migrant workers are on the brink of serious health and stability crisis. The marginalised sectors such as households domestic and caregivers have experienced a dramatic drop of income since the outbreak.

Many overseas workers face uncertainty and inequality for benefits and assistance amid the pandemic. The “Cura Italia” decree was heavily criticised as inefficient and unjust because it is not evident if the marginalised workers can easily access for an economic assistance. 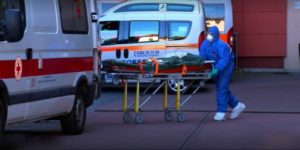 Moreover, the OFW Watch task force has urged the government of the Philippines to support its nationals in Italy as the virus is quickly spreading in the community. The Philippine Overseas Labour Employment (POLO) in Rome and Milan has initiated the gathering of data of displaced workers but the agency is yet to report any concrete assistance to have been given to Filipino nationals in Italy.

“We call on our government to act immediately to help the Filipino workers in this time of economic instability and health crisis,” said Ed Turingan, the spokesperson of OFW Watch Italy’s Task Force.

As president of the National Alliance OFWs in Italy, this reporter believes that if the Philippine government will not quickly respond to the crisis such as giving assistance to its people who could not work because of COVID-19, and providing financial aid to the families of those who are infected and incapacitated, then we might see the worst effect of the pandemic to a country whose economy largely relies on the remittance of the overseas workers. (With reports from OFW Task Force COVID-19)