You are at:Home»News»Middle East News»Filipino migrant workers in the UAE honoured at Expo 2020

The Philippine and UAE governments’ top officials have expressed their appreciation to the hundreds and thousands of Filipino migrant workers in the UAE, as both countries marked strong ties at the Expo 2020 Dubai.

UAE Minister of State Ahmed bin Ali Al Sayegh and Philippine Secretary of Trade and Industry, Ramon Lopez acknowledged that the Filipino migrant workers in the UAE have made and continue to make significant contributions to the economies of both countries.

“The Filipino diaspora in the UAE is considered one of the [country’s] largest communities exceeding half a million people, and continuing to play a key role in our nation’s growth and development, and hearts as you all know,” said Minister Al Sayegh in his speech during the celebration of Philippine National Day at the Expo 2020 Dubai on Friday (Feb. 11).

“The relationship between the UAE and the Philippines which was established in the early ‘70s, is a strong one based on shared visions and mutual respect,” he said. 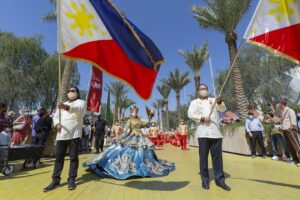 Secretary Lopez said, the Philippines’ relationship with the UAE has been “founded on people power” with the estimated 700,000 Filipinos presently living in the UAE.

“It is with boldness that I state a simple fact: We help power not only your economies but your lives with care and compassion, giving a deeper meaning to the word ‘service’,” said Mr. Lopez, who expressed his gratitude to the UAE President, Sheikh Khalifa bin Zayed bin Sultan Al Nahyan and his government “for taking good care of our Filipino nationals and providing them with the safe environment to grow and prosper”.

“I salute our fellow Filipinos here in the UAE. Let’s give them a big round of applause, and commend their fearless quest for a better life for themselves, their families and loved ones, and for their communities,” Mr. Lopez told the rest of the officials from both countries present in the historic event. 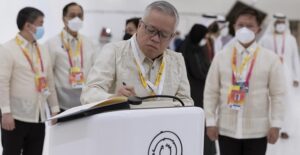 Hundreds of Filipinos witnessed the ceremonial hoisting of the Philippine national flag at the Al Wasl Dome, alongside the UAE and Expo 2020 flags.

A gala presentation at the Jubilee Park featured Filipino artists and performers who staged a cultural performance became the highlight of the evening.

The spectacular Daluyong ng Diwa, an original piece by Ejay Yatco, that used the combination of songs, dance, lights, sounds and high-tech visuals to depict the four-thousand-year history of the Filipino people, both entertained and educated the multi-national audience.

The show was created to complement the Philippines Pavilion that has a thematic presentation titled ‘Bangkóta,’ an ancient Filipino word for “coral reef” and presents the sea-oriented Filipinos as globally connected who are thriving in vibrant communities across the world.

Filipino-American pop icon, Bamboo, whose musical talent and songs feature Filipino culture and social issues, rounded off the festivities with a free concert, to the delight of his thousands of Filipino fans in the UAE.

A food festival, showcasing the Philippines’ diverse cuisine was also held at the Philippines Pavilion. All the day long, guests were treated with free food and drinks, courtesy of participating Filipino-owned restaurants and cafes. 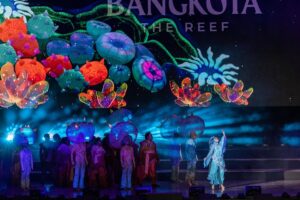 National and Honour Days at Expo 2020 Dubai are moments to celebrate given to each of Expo 2020’s 200-plus international participants, placing a spotlight on their culture and achievements and the displays and programmes in their pavilions.

The Expo 2020 Dubai, which will run only until 31 March, has already received billions of visitors from across the globe to join the making of a new world in a six-month celebration of human creativity, innovation, progress and culture.