You are at:Home»Special Report»Duterte-Jinping friendship and the West Philippine Sea

Over the past weeks, tensions have been high between the two countries as Chinese military vessels keep swarming the disputed waters

In the latest development of the Philippines and China’s ongoing dispute on the West Philippine Sea, representatives of the two countries held the 6th Bilateral Consultation Mechanism on the South China Sea (BCM), a forum established by Philippine President Rodrigo Duterte and China’s leader Xi Jinping in 2016.

In the virtual bilateral meeting on Friday (May 21), the Philippines reiterated its call on China to respect and adhere the international law, which states that the Philippines has the exclusive right to use the maritime resources and the natural resources within its exclusive economic zone (EEZ).

“The Philippines reiterated its long-standing call for full respect and adherence to international law, including the 1982 United Nations Convention on the Law of the Sea (UNCLOS) and its authoritative interpretation and application – the final and binding 2016 South China Sea Arbitral Award,” the Philippines’ Department of Foreign Affairs (DFA) said in a press statement on Saturday, May 22.

“Both sides acknowledged the importance of addressing differences in an atmosphere of openness and cordiality to pave the way for practical cooperation and initiatives,” the DFA said, describing the virtual discussion as “friendly and candid”.

Beijing never acknowledged the judgment by the Permanent Court of Arbitration, even though it ratified UNCLOS in 1996 and continues to claim it has “historical rights” to the West Philippine Sea being part of the South China Sea’s nine-dashed line.

Over the past weeks, tensions have been high between the two countries as Chinese military vessels keep swarming the disputed waters, ignoring repeated calls by Philippine officials for them to leave the area.

On March 21, the Philippine Coast Guard reported on 220 Chinese ships spotted in line formation near Julian Felipe reef or Whitsun reef located at the northeast extreme limit of the Union Banks in the Spratly Islands of the West Philippine Sea.

The report made Philippine Defence Secretary Delfin Lorenzana issue strongly-worded statements against the Chinese authorities. Chinese Ambassador Huang Xilian would have “a lot of explaining to do”, Sec. Lorenzana said in one of his statements.

“China can say what it wants. Philippines will do what it must to keep what’s hers by right. Irrelevant whether we possess commensurate military power to meet the challenge; we will not yield but die—or trigger World War 3. Not a bad outcome; living is overrated. Honour is all,” the secretary Tweeted on April 04.

On May 13, Sec. Locsin ordered the filing of a diplomatic protest over the presence of 287 Chinese vessels scattered in the West Philippine Sea.

However, the office of President Rodrigo Duterte denied that there is a growing tension between the Philippines and China on the disputed territory. 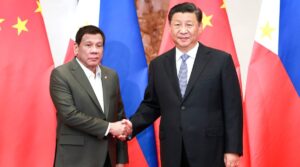 The president, accused by his critics of being too friendly with China is said to be “tip-toeing” over the issue and is allegedly disparaging the Philippines’ 2016 win against China in the arbitral tribunal.

“I, never, never in my campaign as President, promised the people that I would retake the West Philippine Sea. I did not promise that I would pressure China. I never mentioned China and the Philippines in my campaign because that is a very serious matter,” he said, denying that he made a promised to reclaim the disputed waters from the Chinese in his presidential campaign in 2016.

In a pre-recorded press briefing in April, Duterte again asserted that the Philippines would not go to war with China as the Asian superpower is a “good friend.”

“So China, let it be known, is a good friend and we do not want trouble with them especially a war,” he said.

Duterte said the Philippines owed China a huge debt, including supplies of COVID-19 vaccine. He also repeatedly said that his Chinese counterpart Xi Jingping warned of a possible military conflict if the Philippines assert its territorial claims.

The President may maintain his non-combative in addressing the WPS dispute, but advocacy groups refuse to give in to the “systematic bullying” of China and vow never to give up without a fight.

On March 18, a pro-democracy coalition was launched by retired Senior Associate Justice Antonio Carpio, a staunch advocate of the protection and preservation of the Philippine territorial and maritime sovereignty specifically in the West Philippine Sea.

Atty. Howard Calleja (L) and other conveners during the launching of 1Sambayan in Makati City, March 18, 2021 (Photo: Danny Pata/msn.com)

1sambayan aims to form a more competent line-up of candidates for the 2022 national elections and challenge whoever will be anointed by President Rodrigo Duterte, whose administration was described by Justice Carpio as “incompetent.”

Rights Corridor has invited well-respected law professor Atty. Howard Calleja, one of the conveners of 1sambayan, to give his views on the Philippines’ legal claim of the West Philippine Sea, on the Rights Corridor Dialogues May 23 episode.

Prof. Calleja said Duterte’s weak stance on the Philippines’ claim of the WPS has indeed become more pronounced after reports of the recent Chinese military incursions in the area.

“In my personal assessment, this has been an issue that has hounded the president from day one since he took office in 2016 because remember from day one he already started his ‘China pivot’ and he was not strong in enforcing the arbitral award. But in these past few months, with the incursions of the Chinese militia, it has been more evident,” Prof. Calleja said in the virtual discussion.

“The problem with this president is that he makes us think that everything is dependent on China which we feel is not the case,” added Prof. Calleja.

“At this point in time, China is not even the biggest benefactor of the Philippines. Data would show that Japan has given more loans and more aid to the Philippines than China. And we have to remember that Chinese loans, especially the (Belt and Road Initiative) are more onerous to the Filipino people. Not only that it takes away Filipino jobs and gives more preference to Chinese jobs using those loans.”

The professor stressed that “going to war” is not the only solution to resolve the WPS dispute between the Philippines and China.

“We are saying that war is not the answer. The real path is for peaceful settlement of disputes with multilateral efforts; not bilateral only with China,” he said.

“Recently we have seen the US, UK, Italy, France Japan, Australia and EU countries enforcing the right of navigation. So the point is, everybody has recognised this arbitral award. Everybody is pursuing the action to protect the open seas and the right of navigation in the South China Sea and the West Philippine Sea.”

The law professor reiterates it is incumbent to the Philippines to take the lead and “ask the help of other countries fight our battle”.

In another development on the WPS talks, at least 82 former students of Ateneo de Manila University, one of the Philippines’ premier universities, have signed a statement calling on the Duterte administration to use all available diplomatic and legal tools to resist China’s invasion of the WPS, INQUIRER.net reported on Tuesday (May 25).

The joint statement of the ADMU high school classes of 1966, 1970, and the Management Engineering class of 1971 said the administration of President Rodrigo Duterte “must form and implement a robust strategy to counter the actions of China in the disputed region”.

“Denouncing the administration’s policy of ‘total surrender to China’, the alumni proposed the employment of ‘the full range’ of legal, diplomatic and other tools at our disposal to implement the course of action,” said the signed joint statement.

1sambayan and the Ateneo alumni believe that defending the country’s territory against foreign incursion is a sacred duty that the government owes to both previous and future generations.