Civil society organisations, including farmers, farm workers, rural youth, women, and the urban poor, vowed to keep fanning the flames on their resistance towards the Rice Tariffication Law (RTL) or Republic Act (RA) 11203, signed into law by President Rodrigo Duterte on February 19, 2019.

According to opposition groups, RA 11203, which they refer to as the Rice Liberalization Law (RLL), has replaced the quantitative restrictions on rice imports with a 35% tariff for ASEAN imports and a 50% tariff for non-ASEAN imports and opened the floodgates for imported rice into the country.

“When we became a member of the World Trade Organisation in 1994, we already felt the ill effects of its deregulation policies on agriculture. Imported rice flooded our markets since 1995, as we were obliged to import 1% (59 metric tons) of rice yearly despite the fact that we have sufficient rice supply,” said Catarina Estavillo, Secretary General of Amihan National Federation of Peasant Women and spokesperson of Bantay Bigas (Rice Watch Alliance) during the Nov.22 Rights Corridor Dialogues webinar.

“Since then, the price of palay (rice seedling) plunged, to the detriment of our farmers who desperately try to cough up unnecessary expenses to increase yield and raise their income in able to compete with market prices,” she said.

The peasant women leader added that the RLL has also caused the deterioration of the country’s self-sufficiency as the government has relied so much on importation for food security.

“Whenever we import agricultural food products from other countries, our government is helping the farming industry of the exporting countries more than our local farmers. In effect, this has reduced our being self-sufficient and self-reliant,” she told members of OFW Watch Italy during the virtual discussion. 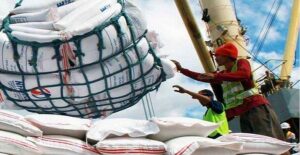 Activists claimed that in 2018, the government has created an “artificial shortage of rice supply” in the market, when the National Food Authority (NFA) announced that the agency’s buffer stock of government subsidised rice, or NFA rice, will only last for a few days.

The nationwide “rice shortage crisis” became the government’s basis for pushing the enactment of RA 11203, in order to lower the price of commercial rice in the market.

The enactment of the law was supposed to deregulate imports and make the Philippines become more food-secure. The government’s economic managers and researchers were sure that with the new law, rice would become more affordable and poor peasants would gain an advantage, with less cost and more yield.

But one year since the new policy was enacted, observers and critics say that nothing much has changed in the Philippine rice industry, except that prices of both palay and rice went down and the country’s rice imports recorded its highest volume ever.

The loss has impacted about 2.7 million families of peasants across the country, left millions of debt-ridden farmers either bankrupt or landless and end up as farm labourers to wealthy landlords.

Furthermore, after the implementation of RA 11203, the National Food Authority (NFA) totally stopped the distribution of the government-subsidised PHP27.00 (US$.056) per kilo NFA rice, affecting about 10 million low-income consumers in the country.

“One can only imagine how these poor farmers would sell their produce at dirt cheap price, and then head to the marketplace to buy farm products for their own consumption at very high prices,” said Ms. Estavillo.

“That is why it is not surprising that no matter how hard the government insists on how cheap imported rice is at PHP42.00 (US$0.87) per kilo, lower-income consumers would still prefer the much cheaper NFA rice that was sold at PHP27.00 (US$0.56) per kilo. But the problem is NFA rice is now “missing” and is no longer available.”

The contentious RA 11203, according to Ms. Estavillo, had also cost the jobs of about 1,000 NFA employees in the local procurement, retailing, warehousing, importation sections when they were let go right after the distribution of the subsidised rice ceased.

On the other hand, big players who were capable of putting up huge capitals dominated the agricultural industry, shipping tons of imported rice into the country.

Since January 2019, over 3 million metric tons of rice have been imported by the Philippines, thereby making it the world’s largest rice importer that year, as projected in the report by the United States’ Department of Agriculture-Foreign Agricultural Services (USDA-FAS), increasing the 2018 record by 58% from 1.9 million MT, and by 275% against the 2017 record. 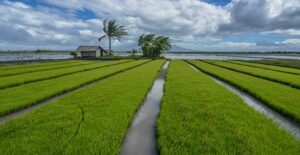 However, the opposition groups and the industry’s other major stakeholders are not just for the scrapping of the highly controversial law. Campaigners have in fact, laid down some clear set short, medium, and long-term recommendations for the government, Ms. Estavillo pointed out.

The Makabayan bloc in the House of Congress had also passed House Bill No. 555, the Free Land Distribution Bill or what rights groups call the “Genuine Agrarian Reform Bill” (GARB) that seeks to provide social justice to landless farmers, and the distribution of all agricultural lands for free to actual tillers, farmers and all those willing to till the land.

Under House Bill No. 555, the lawmakers proposed that land distribution should include all public and private agricultural lands exceeding five hectares; lands that have been declared and/or reserved for non-agricultural uses but remain unutilized and undeveloped including military and school reservations and lands that have been reclassified or converted for commercial; industrial or residential uses but have remained undeveloped and previously used for agricultural purposes.

“These are the recommendations that farmers groups support and campaign for…we are hoping that not only the farmers but the rest of the Filipino citizens would help us push for the enactment of these two House Bills, including our overseas migrant workers so that when they eventually come home, they will find that the country has more food security,” said Ms. Estavillo.

“The Philippines still remains an agricultural country and 75% of its rural poor are farmers. We vow to continue with our fight for the peasants until they get what they are entitled to and truly deserve,” she said in conclusion.